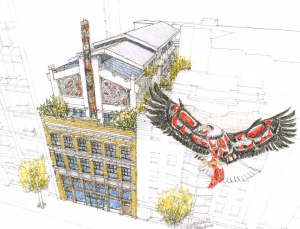 Out of respect for the Squamish, Musqueam and Tsleil-Waututh peoples on whose traditional and unceded territory this hotel sits, we asked Chief Ian Campbell (ancestral name Xálek’/Sekyú Siyám) of the Squamish Nation to give us a name that would reflect the culture, history and meaning of this place to the original occupants of the land.  Chief Campbell told us that prior to European contact this area was known by the local Indigenous groups as Skwachàys. It was a place of abundance and provided much in the form of food and materials to allow people to survive and prosper. Salt marshes filled the area with underground springs coming up into them. The springs were regarded as portals to the spirit realm and the area was felt to be a place of transformation.  That description struck a chord with us at Vancouver Native Housing Society (VNHS) as we had in recent years, developed a theme we called “Community Building through the Transformative Power of Art.” It is also a concept particularly fitting for this building, as it is our hope and aspiration that after a three-year tenancy here the resident artists will have had life-altering experiences; allowing them to move on in their personal and professional lives, permitting others to take their place and continue the process.

The Skwachàys Lodge logo is derived from an original work created by Eric Parnell, a Haida artist living in Vancouver. The original work was created for ‘Looking Forward, Looking Back’; a story catching project that looked at Vancouver’s Downtown Eastside through the eyes of Indigenous artists.

Parnell chose to represent the idea with duplicate ravens looking inwards and facing each other. The ravens rest within a circle containing two human hands beneath a stylized sun, giving one a sense of holding the reflection in the light of these two views.